Maxi Rodriguez finished last season in surely the best form of his entire career. In his final four starts for Liverpool he scored seven goals, including two hat-tricks. Not only that, but he was in the match day squad of eighteen for every single league game last season, aside from the final day defeat at Villa Park, so it seems that he was a good player to have at the team’s disposal throughout the season, under both Roy Hodgson and Kenny Dalglish.

Yet this season he has largely been frozen out, and I can’t think of any logical reason why.

So far in the league, he has only featured in seven of the matches, has not completed any of them, and has played less minutes than seventeen members of Liverpool’s squad (to give that some context, the only players who have featured less are Coates, Shelvey, Flanagan, Aurelio and Doni; none of whom are better than second choice in their position).

Which if Kenny thinks the players he has selected have been playing better than Maxi has been would be fine by me, but there is very little evidence to suggest that this is the case. For starters, check out the minutes-per-goal statistics for the Liverpool squad in the Premier League this season:

I have included every player who has scored, plus Stewart Downing on the basis that he has often taken a place in the side that perhaps could have gone to Rodriguez. Whilst he is behind one of the out-and-out strikers, Maxi has still found the net more regularly than his fellow midfielders. When we look at the shooting accuracy figures, it’s clear to see why: 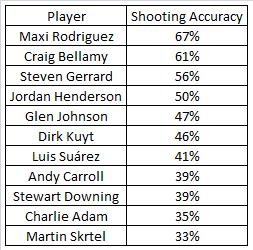 Once again, it’s Rodriguez and Bellamy who are leading the way, with the likes of Henderson, Kuyt and Downing once again lower down the rankings than the Argentine they have been keeping out of the side.

What else can we assess the players on? Soccernomics author Simon Kuper has said (in this interview here) regarding stats that are useful:

“There are a couple I’ve been told by people in the game. If you’re looking for an attacking midfielder, a great stat is pass completion in final third of the pitch. The best players are really good at that”.

(23/03/12 Update: In this interview, Rafa Benitez talks about what statistics are key and says “The main thing for me is passes per game, passing accuracy and in particular final third passing accuracy“).

Maxi comes into that category of player, so how does he fare against his Reds colleagues? 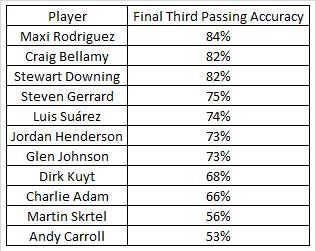 It’s probably no surprise to see the familiar pairing at the top of this chart, as with the previous two.

There’s an obvious counter-argument to the findings in these statistics; Maxi and Bellamy have played less than the other players listed, and with a smaller sample of figures there is more opportunity to post better percentages.

Whilst that is true, it’s not as if the other players keeping Maxi out of the team are performing nearly as well, and in a season when Liverpool have a woeful scoring record (just 1.11 goals per league game at the time of writing), to my mind it seems ludicrous not to give Rodriguez more game time.

Unless of course Kenny knows something about Maxi that we don’t, which is entirely plausible. But I believe that Rodriguez could give the Reds an injection of nous and game intelligence that has been sorely lacking of late, and which the team is currently crying out for.

Statistics sourced from EPLIndex. Please take a look at my other articles, a list of which can be found here.