This article first appeared on The Tomkins Times on 11th August 2012.

For the second time in five years, Craig Bellamy has left Liverpool after a single season for pastures new. Well, pastures old in this case actually, as he is returning to Cardiff, which is both his home town and a side he has played for previously.

Considering his high wages and injury record, it’s probably no surprise that Liverpool did not stand in his way when he asked to leave. A record of nine goals in thirty-seven appearances (though from only eighteen starts, in fairness) doesn’t appear to be too difficult to replace either.

But Bellamy offered far more to the Reds than merely goals last season, and making up the shortfall in other areas may not be so straightforward.

For instance, the amount of ground that the Welshman covered in every game should not be underestimated, not least when considering how many injuries he has suffered in his career.

Against Manchester City at Anfield, in the second leg of the semi-final of Liverpool’s victorious League Cup campaign, Bellamy broke the record for the highest number of high-intensity, top-speed sprints recorded in a match. Not bad for an injury prone thirty-two year old. Although the details of the record have not been officially divulged, it is believed he recorded 840 metres of sprints, compared to the Premier League average of 324. Remarkable.

Were it not for his performance in that match, it’s highly unlikely that Liverpool would have won their first trophy in six years last season, which enabled Dalglish to complete the domestic trophy set and put a mild gloss on an otherwise disappointing campaign. 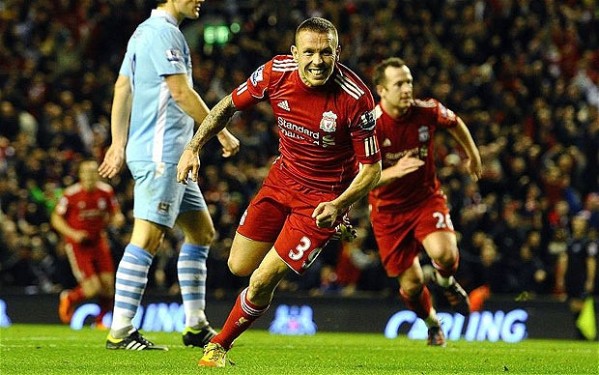 Comparing other key statistics with his Anfield colleagues also shows how he might be missed in the forthcoming campaign.

His 89% passing accuracy was bettered only by Maxi Rodriguez, and Bellamy attempted nearly two hundred passes more than the Argentine. Similarly, Bellamy was joint top at Anfield for the key statistic (according to Craig’s first Liverpool manager, Rafa Benitez at least) of final third passing accuracy, as he tied on 82% with Maxi and Downing.

The Welshman’s 26% crossing accuracy was also the best by any Red who attempted more than five, and considering that crossing was a key game plan for Liverpool last season, this will have endeared him further to the former management team of Damien Comolli and Kenny Dalglish.

On the creative side of the game, Bellamy set up an opportunity for a team-mate every thirty-eight minutes, which was more regularly than any of his Red colleagues managed to. In order to give that a division-wide context, Luka Modric created more chances (ninety-two) than any other Premier League player, and he only lined up an opportunity every thirty-five minutes, so not a great deal more regularly than Liverpool’s Welsh firebrand.

Up front, with six league goals to his name, Bellamy was the only Liverpool player (aside from Luis Suárez) to score more for the club than ‘own goals’ did! Seriously though, with a shooting accuracy of 52%, Bellamy registered the joint highest figure at the club for players with more than one shot, alongside Steven Gerrard. Whilst he was only presented with three clear-cut chances, he took them all whilst his colleagues only scored twenty-four out of eight-eight between them, for a poor 27% conversion rate.

For a free transfer with a history of injury issues, Liverpool could not really have expected any more than they got out of Craig Bellamy. Compared to the likes of £35m Andy Carroll and £20m Stewart Downing, the Welshman provided vastly superior value, and was surely the second best signing of the second Dalglish era behind Suárez.

Bellamy’s pace, experience and footballing nous will all be missed at Anfield, especially as Liverpool were often lacking all three of those attributes at times last season. Hopefully Rodgers tactics will ensure that Craig’s absence won’t be as keenly felt as it would have been for Dalglish’s side, but the stats still show that he would have been able to offer plenty to the Reds’ attack this season.

The Welshman can certainly journey home to Caerdydd to end his career with his head held high. Thanks for everything, Craig.

Statistics sourced from EPLIndex. Please take a look at my other articles, a list of which can be found here. You can follow me on Twitter here.