Following the latest international break, Liverpool resume Premier League action with a match against newly-promoted Reading at home tomorrow, and the Reds really need a win.

A painful statistic doing the rounds is that both Arsenal and Liverpool have won two league games at Anfield in 2012, and Brendan Rodgers needs the Reds to move onto three home victories sooner rather than later if the pressure on him is not going to start becoming unbearable.

However, using EPLIndex’s excellent ‘Top Stats’ function, I have looked at how certain members of the Liverpool squad are performing, and whilst the team as a whole may not have hit the heights as yet under Rodgers, the stats suggest that a number of players are in fact doing really well individually.

The following statistics are for Premier League games only, and where applicable, relate to players who have played at least 450 minutes. At present, Liverpool can boast:

– The player with the joint-third most clear cut chances (6) presented to him (Suárez);

– The players ranked 4th (Gerrard) and 8th (Suárez) for number of chances created. Credit also goes to Raheem Sterling, who is ranked joint 25th in the league, which is a fantastic effort for a 17 year old;

– Two of the six players (Allen and Gerrard) who have played over 500 passes this season;

– Players who are 9th (Allen) and 13th (Sterling) for final third passing accuracy, with Gerrard, Agger and Suárez in the top fifty overall too;

– The 1st (Allen) and 9th (Johnson) ranked players for possession regains. Martin Skrtel, Steven Gerrard and Raheem Sterling can currently be seen in the top fifty as well;

– The players ranked 5th (Allen) and 8th (Skrtel) for least frequent loss of possession, with Daniel Agger and Pepe Reina also in the top fifty;

Plenty there to be positive about. With so many encouraging individual statistics in the squad, surely Liverpool can’t be that far away from being a great side?

Delving deeper into other stats does appear to reveal the reason the team may be struggling a bit so far this season though:

– Pepe Reina is joint top in the Premier League for errors made (3);

– Reina’s save percentage is just 50% this season, compared to 69% last season (and that was already a poor figure by his high standards);

– Luis Suárez has only scored one of the 6 clear-cut chances he has had so far, and only has the 27th best shooting accuracy for players who have had ten shots or more.

In short, it seems as though a lot of the pieces are there for a successful side (and that’s before Sahin has really got going, and Lucas is out with injury), but the question is can Rodgers complete the jigsaw? If he likes working at Liverpool, he may well have to sooner rather than later. 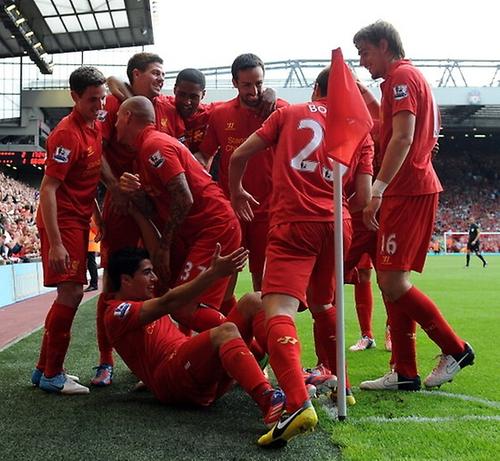