After losing 2-1 away at Manchester United, and with their next two league matches after this weekend being trips to Arsenal and Manchester City, Liverpool could really do with earning three points on Saturday against Norwich City (weather permitting, that is).

The stats from the season so far suggest that they should get them. 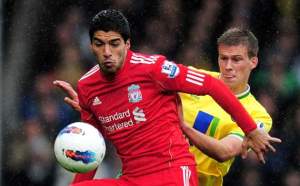 As always, all eyes will be on Luis Suárez, and not just because he has scored six goals in his last 150 minutes against Norwich.

The Uruguayan admitted in midweek that he tried to win a penalty against Stoke earlier this season, and was castigated by Brendan Rodgers for his trouble, so I wouldn’t expect him to win too many decisions from referee Michael Oliver.

The club’s top scorer this season could make history in this game though, as no Liverpool player has ever scored three league hat-tricks against the same club.

Suárez’ new strike partner Daniel Sturridge will likely make his first league start for the Reds, and will hope to continue the good start he has made to his Liverpool career. The former Chelsea man has two goals from just 99 minutes on the pitch so far, and as Norwich only have one league clean sheet on the road this season, there’s a fair chance he might net again. Remarkably, Sturridge will become Liverpool’s joint-third top scorer in the league with a goal against Norwich, within 1.5 games!

If he does score, Sturridge will be the first player since Ray Kennedy in 1974 to score in his first three Liverpool appearances, and only the seventh man ever to achieve the feat for the club, so it will be quite an achievement if the new striker can manage it. But what do Norwich’s stats suggest might happen in the match?

The key thing I note from the Canaries’ numbers is that they don’t win possession very often in the final third; barely once a game in fact. This is great news for Liverpool as their main troubles recently have come from when they’ve been pressed high up the field (by Stoke and Manchester United, to name but two), but this appears unlikely to happen on Saturday.

My main concern is Norwich’s set piece ability, as the Reds have not been defending them too well of late. I noted before the United match that the Red Devils had scored the most set piece goals this season, and indeed they scored against Liverpool in this fashion last Sunday.

Norwich are the second highest scorers from set pieces in the Premier League with twelve, and unlike United this accounts for a whopping 50% of their goal tally, so the Reds’ defence need to be wary of Grant Holt and co.

In terms of the all important shooting figures, Liverpool average 6.3 shots on target per home game, and Norwich average 3.4 away, so statistically the Reds should win, but then the stats said the same thing about the Villa game!

But the Reds are on a good run of form in front of goal, having scored in each of their last eleven games, which is their best run since September 2009. Credit has to go to Brendan Rodgers for this, and it’s worth noting that Liverpool have scored more goals than they have in five of the past eight seasons.