In March 2012, I wrote this article which looked at Liverpool’s unfortunate knack of frequently hitting the woodwork last season, and indeed by the end of 2011/12 they had set a new Premier League record for hitting the goal frame, after racking up 33 of the very closest of misses.

I hadn’t thought much of that record, until I saw this picture from Optajoe, which illustrated just how costly finding the woodwork had been for Liverpool this season.

For the second season running, if every woodwork hit was a goal, then Liverpool would have finished fourth in the league. What with this, and referees costing the Reds ten points through incorrect decisions this season, it feels like Brendan Rodgers has his work cut out even more than we thought!

I try not to make excuses for bad results wherever possible, but I think this information suggests that Liverpool aren’t that far away from where they want to be. Using the data in the aforementioned Optajoe picture, plus the regular league table, I have been able to compile a table of how each team’s results was affected by woodwork hits (though of course, it does assume that every match would have been otherwise unaffected aside from the extra goals, which they clearly would not have been), and how many hits each team had for and against. 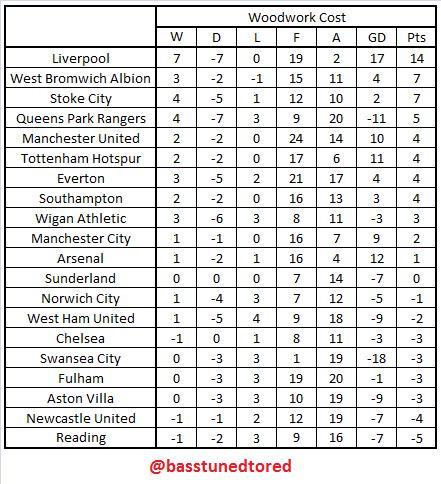 Liverpool’s poor finishing/bad luck (delete as applicable) cost them fourteen points in 2012/13, which was as many as the next two most affected teams put together.

Seven draws (including four of the Reds’ five 0-0s) perhaps should have been won, but for a lack of better finishing from Suárez and co. For instance, Stoke City managed to snaffle a goalless draw away from Anfield in September, yet Skrtel, Sterling and Suárez all managed to find the frame of the goal in the match, so the Reds were surely unlucky not to win.

It’s no surprise either to see that the Reds’ opponents had the fewest frame rattlers, as Liverpool gave away fewer shots in the box than every other Premier League side, so did well at limiting the close range opportunities that are more likely to lead to woodwork strikes.

Obviously the above numbers don’t change anything, but it struck me as interesting that the frame of the goal has cost Liverpool a crack at the Champions League for the second year running. Fingers crossed for next year, Reds!

Woodwork Woes, And What-If’s – Whilst it’s well known that Liverpool have hit the post or bar a lot this season, which games has it really mattered in?

Liverpool FC 2011/12 In Stats: The Good, The Bad And The Ugly – An end of season round-up of the facts and figures behind Liverpool’s Premier League campaign.