Twitter was sent in to a flutter on Thursday night when the news broke that Liverpool had bid north of £20m for Atletico Madrid’s Diego Costa.

Having looked at his shooting stats, I can certainly see why the Reds are in for the hot-headed Brazilian.

Quite simply, the twenty-four year old has a fantastic record in front of goal, especially in the last three seasons. The stats from WhoScored show a dead eyed marksman who only needs five or six shots to find the back of the net.

To give these figures some context, 10.1% of shots in the Premier League were scored last season, and for four seasons Costa has been ahead of the 2012/13 efforts of Luis Suárez (who converted 12.2% of his 187 shots) and even Daniel Sturridge (16.4%), who scored more goals in his first twelve Liverpool league games than any striker in the club’s history. Costa clearly knows where the goal is.

Looking at his goal map (taken from squawka), it’s perhaps clear to see why they have different records. Not for Costa the speculative long range effort… 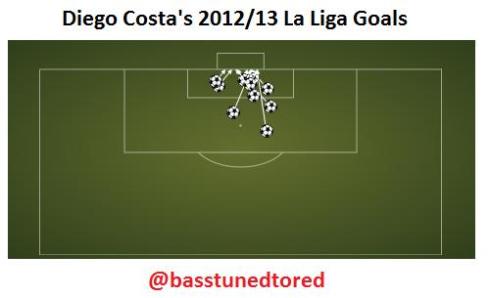 Nothing very much further out than twelve yards, nor wider than the frame of the goal. After the erratic shooting antics of Luis Suárez, who is unafraid to shoot from both ludicrous angles and distances, Costa’s skill set might be just what the Reds need.

This shot heat map from Stephen McCarthy paints a similar picture to the above diagram. Virtually every effort occurred within the goal area, with a nice big hotspot centrally and close in. Very encouraging.

It was also interesting to read, in this excellent analysis, how good Costa is with his head:

Heading appears to be one of his strengths as his 5 goals came from just 14 headers.

This superb conversion rate of 36% was the highest across the Big 5 leagues last season for players with at least 14 headers.

After cutting Carroll loose as swiftly as he could, perhaps Brendan Rodgers has now realised that he does need an aerial presence in the muck-and-bullets-blood-and-thunder-alehouse-‘football’ of the Premier League.

Costa’s remarkable ability to put his shots on target perhaps helps to explain his goal record too. Using data from EPLIndex, I looked at the shooting accuracy records for players with at least fifty shots in the 2012/13 Premier League, and compared Costa with the best of them. The Atleti man leads the way… 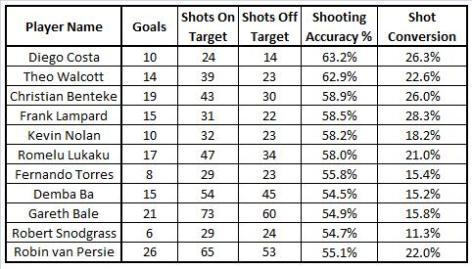 Costa has the best shooting accuracy, and was only beaten for shot conversion by Frank Lampard, who scored a third of his fifteen goals from the penalty spot. Impressive stuff.

Inevitably, it’s not all positive (else he’d cost about £80m), and Costa does have a poor record for turning the ball over to the opposition through poor control, albeit not as bad as Luis Suárez.

The Brazilian averaged 1.9 turnovers per game, which put him in the hundred worst culprits in Europe’s top five leagues for gifting the ball to the other team.

If he were to move to Liverpool, there would also have to be a question mark over whether or not he could deal with being the number one striker (as I assume Suárez will be leaving Anfield).

Costa’s shooting record may be good as he hasn’t taken too many efforts at goal for Atletico, whilst playing second fiddle to Falcao, and so his accuracy will surely drop when asked to be more prominent at Liverpool.

He will likely score fewer goals in England too, as they are slightly easier to come by in Spain. I mentioned earlier that 10.1% of shots were scored in the Premier League, but 11% found the net in La Liga, suggesting a slightly higher quality of defence is to be found in Liverpool’s division.

But before we can find that out, he actually needs to sign for Liverpool, and based on these stats, I certainly hope he does.

Alessandro Matri: Liverpool Bound? – No idea, but his stats suggest the Reds should at least be interested.

Hold Your Nerve (Now and Next Season) – Some thoughts on Liverpool’s transfer activity so far in summer 2013.

Mkhitaryan vs Eriksen: Champions League Showdown – Two supposed transfer targets for the Reds, but who has performed better in Europe’s top club competition?