As Liverpool are surprisingly sitting on top of the Premier League after four games, people are quick to point to reasons why it won’t last. One such observation is that Simon Mignolet has made more saves than any other goalkeeper in the top flight this season.

The logic goes that as he’s making so many saves, the Reds are giving away too many shots on target, and so their impressive defensive record, which includes three clean sheets in their first four matches, can’t possibly continue for long.

As with all use of statistics, context is required to try to establish how much truth there really is in the above theory. Using a similar system to my recent chance quality work, I have found that Brendan Rodgers needn’t worry about Liverpool’s defence too much just yet. 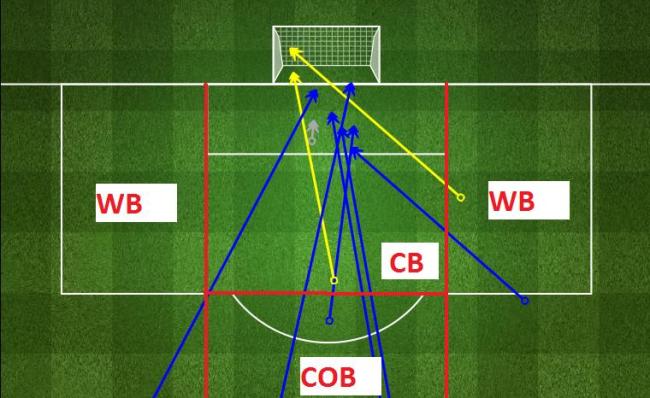 In descending order of importance, the four zones I shall use are:

So we can see that Swansea had two CBs, one WB, four COBs, and two from the rest of the pitch in the above example. I have compiled these figures for Liverpool in 2013/14, and then five other teams that have conceded a similar number of shots on target.

These numbers reveal what I mentioned above: Liverpool’s defence is realistically better than some of their contemporaries. The below teams are sorted by the percentage of shots on target that they have conceded in the centre of the box.

We can see here that despite conceding slightly fewer shots on target overall, Sunderland and Swansea City have allowed their opponents two times as many shots on goal in the centre of the box than Liverpool have.

The Reds have been able to keep over half of the shots on target they have allowed outside of the penalty area, and this has helped them keep clean sheets; the above Swansea shot chart shows that the two goals that Liverpool have conceded so far this season have been from inside the area. It certainly helps to illustrate the value of keeping opposition shooters outside your own area.

I intend to continue to monitor this for the rest of the season, so look out for further in-depth analysis in the future.

UPDATE 20/09/13: I have just read that Southampton have given away the fewest shots on target in the Premier League so far this season, and as Liverpool are facing the Saints tomorrow, it made sense to compile their figures:

Southampton deserve a lot of credit for not allowing their opponents many shots on target, but as 55.6% of them have been in the centre of the box, and 88.9% in the penalty area as a whole, this should certainly offer Sturridge and Co. some encouragement ahead of the match.

Swansea 2 Liverpool 2: Stats Zone Analysis – What do the chalkboards tell us about the Liberty Stadium draw?

PLCQ: The First Three Weeks – After three matches, which teams have created chances in the best areas of the pitch?

Liverpool 1 Manchester United 0: Stats Zone Analysis – The first in a new series, looking at the key issues from a match by utilising the Stats Zone chalkboards.