Regular readers will know that I am compiling chance quality stats for the whole Premier League this season (but if this is news to you, please read the introductory piece), and so it’s time for the latest weekly round up.

As well as a look at who did well and who didn’t this week, I’ll also see if this data can shed any light on the decision by Sunderland to dismiss Paolo Di Canio.

To start, a look at the up-to-date chance creation table: 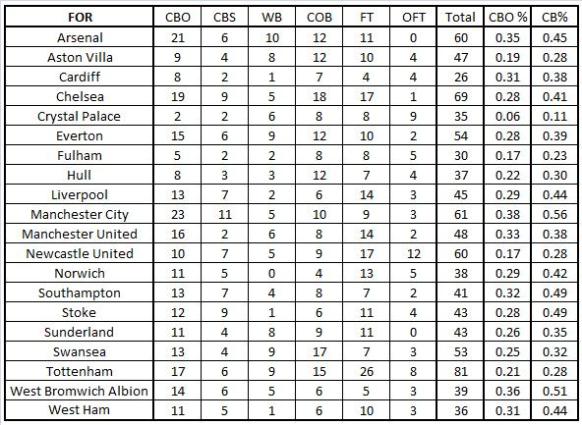 Whilst Spurs lead the way in terms of total opportunities, the fact that they have created so many in poorer areas of the pitch means that Manchester City are still the top dogs for quality of chance, as the following table (which applies my chance quality scoring system) shows:

As an example, Sunderland have only created two fewer chances than Liverpool, and they have been of higher quality than the Reds’ on average too. Nine teams have fewer chance points than the Mackems so far this season, so perhaps they should have scored more than three goals, the joint fewest in the division.

Seven teams have also conceded more chances than Sunderland this season, as we can see here:

Only three teams have allowed a greater proportion of their opponents’ chances in the centre of the box than Sunderland, which probably explains why they have conceded the most goals so far this season (eleven). It seems to me that Di Canio is possibly a victim of his strikers being inefficent whilst their opponents have been far more clinical.

This isn’t to say that they would regress to whatever their mean is and naturally improve necessarily, but these figures do suggest they perhaps haven’t been quite as bad as the league table currently suggests. A quick look at the assists, and we can then look at what we learned this week:

The key events from this week, are:

As this is primarily a Liverpool blog, the round up finishes with an in-depth look at how the Reds squad are performing creativity-wise: 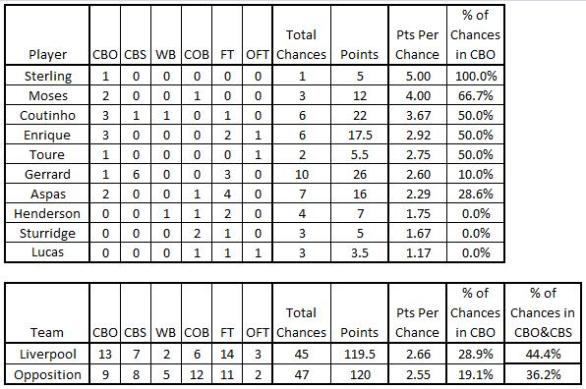 Raheem Sterling came off the bench against Southampton to create his first chance of the season, and as it was a very good one, he goes to the top of the chart. In truth, he’d have been better off converting one of the three chances that Sturridge created instead, which would’ve earned the Reds a point.

With Luis Suárez back from his suspension, he will surely join this chart after Liverpool play, of all teams, Sunderland on Sunday afternoon. As he has a fondness for shooting from all angles and areas of the pitch, we could easily see Liverpool’s chance rate increase, but the quality average decreasing. Interesting times ahead.