I don’t post these round ups every week as there’s not always much of note worth sharing, but as I spotted a few interesting firsts and other bits and bobs this week, I thought it was worth posting them here.

As this is primarily a Liverpool blog, I’ll start with a look at the Reds. For the first time this season, Brendan Rodgers’ men created more than half of their chances outside of the box. 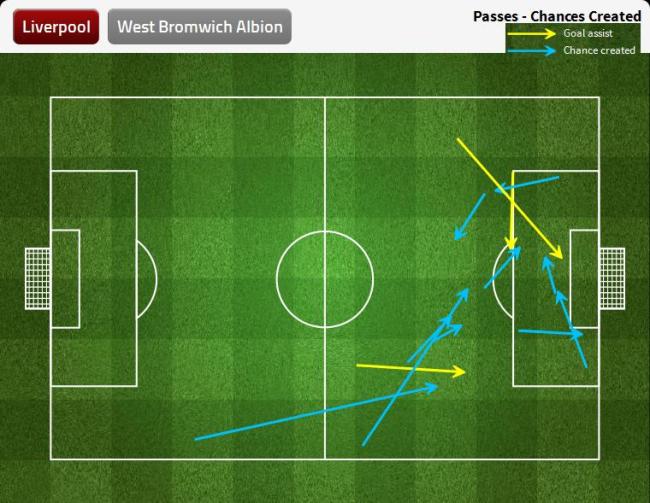 Fortunately for Liverpool, they possess two of the Premier League’s best strikers (maybe even the best duo?), so they were still able to score four goals for the first time this season.

Hopefully Liverpool can exploit the Arsenal back line in the big match this Saturday… but back to last weekend, and another first for the season. This time, it was Stoke City who achieved something new for the 2013/14 Premier League. 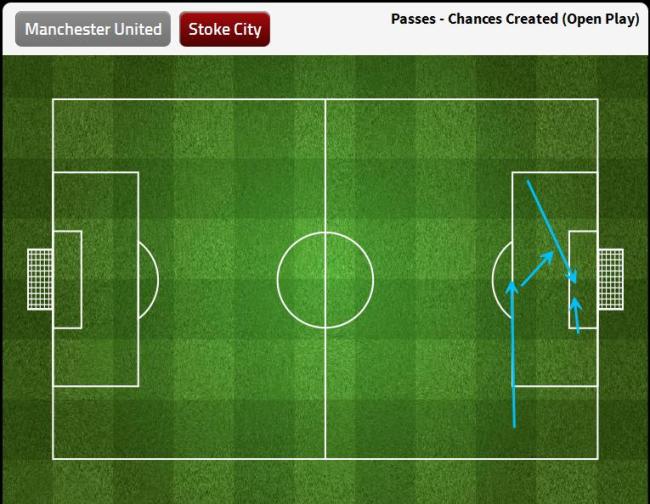 Mark Hughes’ team were the first side this season to create all of their open play chances in the centre of the box. Had they converted any of them they would surely have left Salford with at least a point.

Over at Carrow Road, Chris Hughton must be wondering how on earth his Norwich side failed to score against Cardiff: 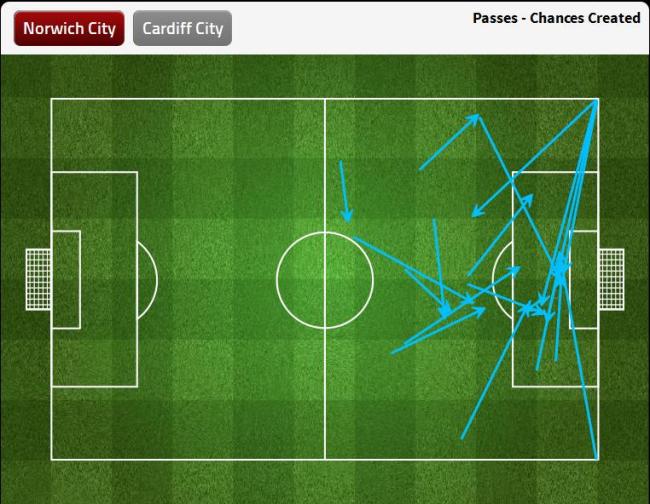 You’ll probably have to take my word for it, but there are eleven arrow tips in the centre of the Cardiff box; only Manchester City against Newcastle in week one have created more opportunities in this area, with twelve. As around 13% of central box chances are scored on average, the Canaries should really have scored at least once and claimed three valuable points.

At White Hart Lane, Spurs were lucky to take all three points thanks to a soft penalty, and their open play chance map shows just how much they struggled:

Just one chance created in the box, without even any in the central area outside the box. It’s easy to say that they mugged £85m from Madrid for Bale, but his replacements aren’t creating very much in quality areas; not that the Welshman always did either, but that’s another story.

I’ll finish the round up at St Mary’s Stadium, where the contrast between the upwardly mobile Saints and their floundering visitors from Craven Cottage could not be more pronounced. Firstly, Southampton:

With eight open play chances created in the centre of the box, the Saints posted the second best tally on this front in the league this season (just behind the nine that Manchester City rustled up in their opening match). Meanwhile, as for Fulham:

This is not an error; in the 86th match of the 2013/14 season, a team finally went through the entire ninety minutes without creating a thing. Not one Fulham player managed to pass to another with the latter having a shot. The fact that the Cottagers have now created the fewest chances in the centre of the box, and the fewest overall too, should fill their fans with dread for the rest of the campaign.

And on that cheery note, I’m off. Thanks for reading!

Newcastle United 2 Liverpool 2: Stats Zone Analysis – Looking at the key issues from the match by utilising the Stats Zone chalkboards.