After a match up between two of the Premier League’s best teams for chance quality at the Emirates Stadium last weekend, this week sees teams at opposite ends of the spectrum meet at Anfield, when Fulham visit Liverpool on Saturday afternoon.

Although the Cottagers have been clinical in a couple of areas of the pitch, by and large their chance creation this season (both for and against) has been something of a horror show. The Reds will surely have enough in their armoury to win the match, and the below explains why.

Prior to checking the league table, I’d have never guessed that Fulham have scored more goals than Tottenham and only conceded two more than Manchester United.

Their ‘chance difference’ of -71 is the worst in the division (and some 79 behind Liverpool’s), and Fulham’s opponents as a whole this season have had more chances than them in every one of the six chance quality zones that I use (for a full explanation on chance quality, read this).

The Cottagers have had ninety-nine fewer shots than they have allowed too, which is the worst tally in the top flight (and as a curious aside, Liverpool’s shot difference is exactly zero at present; 144 both for and against), and Fulham have had just thirty-two shots on target this season; Suárez and Sturridge alone have had thirty for Liverpool!

I think it is only Fulham’s chance conversion efficiency in a couple of areas of the pitch that has kept them above the relegation waterline so far.

They have converted three of their set play chances in the centre of the box so far, which is fairly remarkable as they’ve only created six such chances in total. Their 50% conversion ratio from such chances is way above average (11.5%), and in view of Liverpool’s well documented issues with set piece defending, this will surely offer the visitors their best chance of scoring.

In fact, of the 120 chance quality zones in the Premier League (six each for twenty teams), Fulham’s conversion rate from set piece chances in the centre of the box currently tops the lot. They’ve been valuable goals too; two of their three victories have featured set-piece goals, including the winner at Sunderland on the opening day.

Fulham have also scored three goals from chances in the final third, which is the most in the top flight, and the other nineteen teams in the division only have ten between them. One of Fulham’s three was Kasami’s world-class effort at Crystal Palace; a fantastic strike, no question, but not the kind of one that would happen too often.

Regular readers will know that my main interest with regards to chance quality is how many CBOs (which are open play chances in the centre of the box) that teams have and concede. Take a look at the below graph. It shows how many CBOs both Liverpool and Fulham have created and conceded in total as the season has gone on. 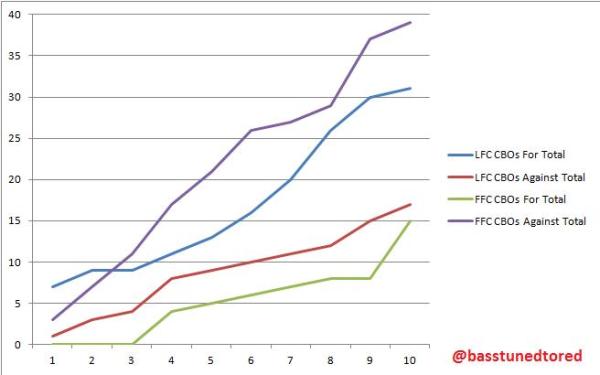 You may need to give it a second look; you probably assumed that the pairs of lines that are close to each other are the for and against lines for both teams.

But they are not. Liverpool’s ‘for’ line is close to Fulham’s ‘against’, and the same is true for the opposite lines. Whilst the Reds have been performing well at both ends of the pitch, the reverse is true for their forthcoming visitors.

Although Fulham have not had the fewest CBOs in the Premier League this season, almost half of their tally (seven of their fifteen) came last weekend against Manchester United. Sounds impressive to do so well against the champions, but then six of them came once they were already 3-0 down, and the match was clearly lost.

On the road their record is even worse; just two CBOs for, and a whopping twenty-one against. Meanwhile at Anfield, Liverpool have had seventeen and allowed their opponents seven. In other words, the Reds average more per game at home (3.4) than Fulham have had in total in their five away matches.

So how can the Reds take advantage of Fulham’s creaking backline? Based on the two games where they’ve allowed the most CBOs, the answer would appear to be from crossing. This isn’t particularly one of Liverpool’s strengths, but the below charts show how susceptible the Cottagers are on this front. 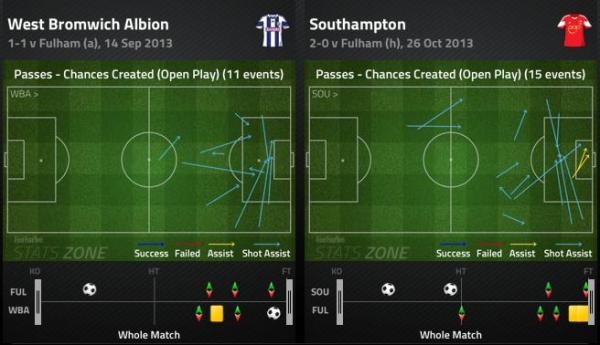 As I noted in a recent chance quality round up, in their previous away game at Southampton Fulham did not create a single chance (and are the only team in the one hundred matches so far this season not to do so), and allowed eight CBOs, which was the second most of any team so far this season.

In view of all of this, it’s hard not to predict a comfortable Liverpool win. The Reds may also be able to claim a first clean sheet in seven games, thus putting to bed their longest shutout-less run in the league since 2004/05, and send the red side of Merseyside into yet another interminable international break in good spirits, and in the top three of the Premier League.

Arsenal 2 Liverpool 0: Stats Zone Analysis – It wasn’t all bad for the Reds, even if the result was…

Liverpool’s Most Successful Formation Is… – …not the one you might think!

Second Half Slump? Controlling The Result – Although Liverpool have had some poor second halves in 2013/14, they’ve had better control than you might think…