I wrote in the week how this match represented a golden opportunity for Liverpool to make a giant stride towards a top four finish. Unfortunately they were not able to maximise the potential of this fixture, and so I took a look at the Stats Zone info to see if there were any clues as to why.

Liverpool started the game fairly slowly, whilst looking comfortable, but then sprung into life in the twenty-fourth minute.

Aside from Aly Cissokho, every other one of the Reds’ outfield players was involved in the build up to the goal, and it was definitely the high point of the match from a Liverpool perspective.

Suárez assisted Sturridge for the third time this season, taking the former’s set up tally to nine and the latter’s goal tally to seventeen in 2013/14.

With that strike, Liverpool moved on to fifty-eight league goals for the season; more than in five of the last ten completed campaigns, and still with fourteen more matches to play.

The goal also meant that the Reds have now scored first eighteen times in the Premier League this season, which is the joint most with Manchester City, and Liverpool were able to see out the half with relative ease, with the Baggies having a single long-range effort from Gera to show for their efforts between the opening goal and the break.

The form stats suggested Liverpool were well set for a positive result at half time, as they had won thirteen and drawn two of the fifteen previous matches were they had lead at the break this season.

Whilst they did not lose to maintain this unbeaten record at least, Liverpool still logged their customary defensive error, with Kolo Toure the guilty party, which allowed Victor Anichebe the opportunity to rescue a point. The goal means that Liverpool have given away five strikes in their last seven league matches through their own defensive mistakes.

To give a goal away like that must be incredibly frustrating for Brendan Rodgers. As much as the Reds were far from their sparkling best, they did only allow West Brom one unblocked shot inside the penalty area in the whole game, which Mignolet saved fantastically well. 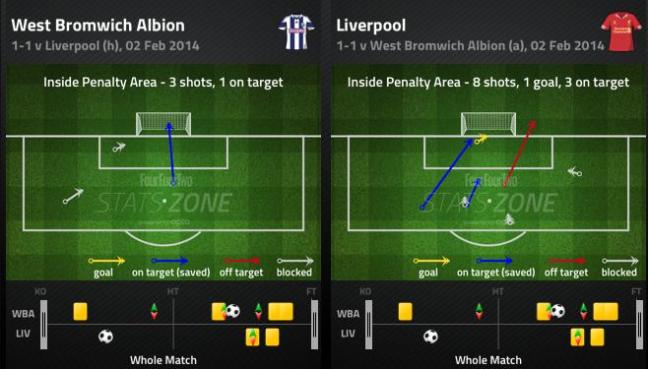 Toure’s howler aside, Liverpool did well at the back, so how come they didn’t score enough goals to put the game beyond West Brom?

Clearly, had Suárez put away a golden opportunity at 1-0 then the Reds would surely have won. But the truth is that Liverpool were woefully uncreative in this match, equalling their joint-lowest figure for chances created this season, with five (as also occurred at Villa Park and Stamford Bridge).

You can see here that, aside from the assist, Liverpool created just one open play chance inside the penalty box, and the two outside of the goal area were not central either. The chance in the box that wasn’t converted was the only goalscoring opportunity that the Reds fashioned in the final fifty-two minutes, and the fact it came from Martin Skrtel following a set piece situation shows that Liverpool essentially created nothing in open play for over half of the match.

The lack of creativity is particularly disappointing considering that (for the period he was on the pitch) Coutinho received the most passes of any of the Liverpool players. Yet for the third time in four games he failed to muster a single goalscoring opportunity for a team-mate, and to make matters worse, he turned over possession through poor control five times and only completed 67% of his passes, against a season-long average of 78%.

At the same time though, West Brom deserve a lot of credit for how they played, and especially their defensive midfield pair of Yacob and Mulumbu.

Tackles: Yacob leads the way with 4.3 per game, so both players basically matched this.

Interceptions: Three players (including Mulumbu) average 3.3 per game, so both hit this level, with Mulumbu almost tripling it.

Ball recoveries: Mulumbu again leads the way, with around eleven per game. Have you spotted the theme yet?

It would therefore be foolish of me to award any kind of star man rating to a Liverpool player (as I usually do in these analyses) but I will tip my hat to Raheem Sterling for this: 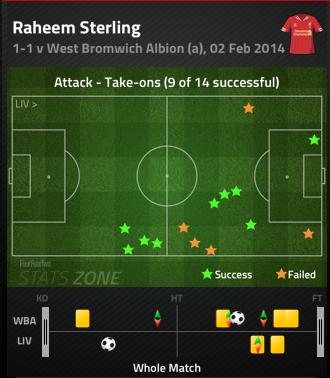 The Premier League’s top dribbler, Andros Townsend of Tottenham Hotspur averages 4.1 completed dribbles (or ‘take-ons’) per game, yet as we can see here, Sterling completed nine in this match.

Although the young man didn’t create any goalscoring opportunities, he was a constant threat on the right hand side, and was the liveliest Liverpudlian overall.

By letting the lead slip, Liverpool racked up another two points dropped from a winning position. The Reds have now dropped twelve in total, and at present only West Ham, with fourteen, are worse on this front.

I always think it’s important to retain perspective after a disappointing result though. By picking up a point at The Hawthorns, the Reds now have thirteen points more than they got from the same fixtures last season, which puts them on track for seventy-four in total.

Similarly, it should not be forgotten that Liverpool have only had more than forty-seven points after twenty-four games once in the twenty-one past seasons of Premier League football (when they had fifty-one in 2008/09).

But having defended well and got themselves in front, this definitely felt like two points dropped, and with league leaders Arsenal up next, they could yet prove a costly loss for Brendan Rodgers’ men.

Liverpool FC Assists 2013/14 – Have you ever wondered which players have assisted each other the most this season? The answer is here if you’re interested.

Liverpool 4 Everton 0: Stats Round Up – All the great facts and figures from a fantastic Merseyside derby.

Henderson and Comolli – An in-depth look at Jordan’s creativity in his final season at Sunderland. Was Comolli right to rate it so strongly?

Solid Foundations – Whether Liverpool finish in the top four or not this season, I think they’re well set for another challenge next year, and here’s why.