One of the top ten most read articles on this website is a look at the difference in transfer spending between Liverpool and Manchester City.

Written in May 2012, I have proceeded to add a postscript every time the teams have met since, to measure what has happened in the intervening transfer windows.

As Liverpool are currently deeply involved in a title race with a pair of financially doped teams who they have to play in the next three weeks, I thought I’d post a quick new piece to compare the transfer spending of all three championship challengers.

The starting point for the previous study was 2007/08, as this was the first full season that Liverpool were owned by Tom Hicks and George Gillett, whilst Manchester City fell under the ownership of Thaksin Shinawatra.

It wasn’t such a significant season for the Blues from London, as they had been making sizeable investments for four years under Roman Abramovich at that point, but we have to compare like for like in terms of time, so I’ll use the same period again.

Here’s a graph showing the net transfer spend of the three clubs for each season since 2007/08. 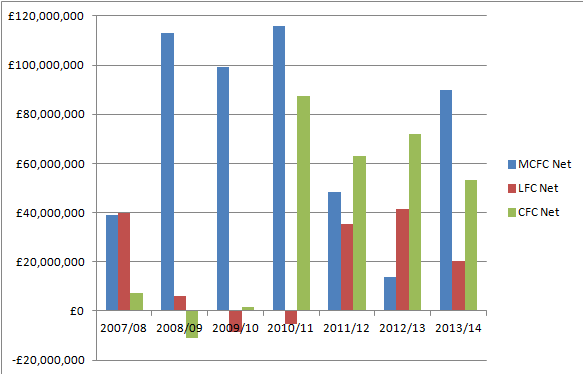 Strange but true: Liverpool were the biggest net spenders in the first season of this study. It’s also surprising to see that Chelsea’s outlay was small (and they even made a profit once) for the first three years of this period, though as I said they had spent heavily prior to that (to the tune of approximately £277m).

You can see from the graph that Manchester City pursued a very similar strategy to Abramovich’s Chelsea: heavy initial investment, followed by a couple of years of relative parsimony. Until they needed to fund the transfer needs of a new manager last summer, that is.

Large outlay tends to buy you proven quality rather than potential, and that is probably reflected in the average age of the three teams this season.

Whilst Manchester City (with an average age of the widely considered peak for a footballer: 27) and Chelsea (26.9) have fielded the fourth and fifth oldest teams on average in the 2013/14 Premier League respectively, the Reds clock in at just 24.4, which makes them the fourth youngest team in the division this season.

My previous article on this subject showed how the net transfer spend has risen for the clubs from the summer of 2007 onwards, so it’s only right to do the same again here.

Liverpool have spent a net total of £129m over this period; City had forked out £152m after just two years, and their net spend has risen every year since. It took Chelsea longer to go past the Reds, but their total net spend of £274m across the last seven seasons is over double that of Liverpool for this era.

When you see these figures, it makes Brendan Rodgers’ work in making Liverpool title challengers all the more impressive. As Rory Smith noted in this fine article, the Reds have shown that it is possible to compete for the top honours on a lower budget, which doesn’t make good reading for the likes of Spurs and Arsenal.

Of course, it’s not like Liverpool haven’t had some money to spend, and a lot of teams would love to have spent £89m net over the last five seasons. But at the same time, as the following table (taken from here) shows, that’s a little less than Stoke City have spent over the same period, and only a shade more than Aston Villa, and both of those teams are lucky to finish in the top half of the Premier League.

Yet here we are with five games to go and Liverpool are top of the league. I’d say that FSG, John W Henry and Brendan Rodgers can certainly look towards next season with their heads held high, however 2013/14 is ultimately resolved.