Liverpool were in desperate need of a victory at Carrow Road. Despite conceding two goals after establishing a lead, the Reds were able to prevail with Luis Suarez amongst the goals.

I am of course referring to the match in September 2012, when Brendan Rodgers secured his first league win as manager of Liverpool FC. As his 41st top flight victory occurred at the same ground, and secured qualification for the group stage of the 2014/15 Champions League in the process, I thought I’d briefly reflect on the journey between the two matches.

Let’s take a look at the team from Liverpool’s 5-2 victory at Norwich last season.

Just six of the eleven started the Reds’ latest encounter with the Canaries, and there’s a fair chance that Allen wouldn’t have played this time if Henderson wasn’t suspended. Both Glen Johnson and Steven Gerrard played in a different position this time around, and a glance at the bench shows few of those players have been available at Anfield this season either.

It’s also worth noting that the 2012 match was only the fifth league start of Raheem Sterling’s career too, so the player lining up then bears little resemblance to the player who scored or assisted all three Liverpool goals this weekend.

In short, the current Reds outfit bears scant resemblance to the one that secured their new boss’ first league win in September 2012, and the stats reflect that development too.

At the start of Brendan Rodgers’ tenure, the manager was keen for his team to retain the ball and focus on possession. In the match away at Norwich City, Liverpool attempted an incredible 700 passes; to give that some context, they only attempted 538 in their latest match.

Although the Reds created more chances at Carrow Road last season (fourteen, compared to twelve this time around), the increased number of passes meant that a goalscoring opportunity was only produced every fifty passes, as opposed to every forty-five this weekend, and every 12.5 final third passes compared with 9.5.

It’s not as if their last fixture was one of Liverpool’s more efficient of late either (unlike this one), but the numbers give a taste of how Rodgers’ side has evolved over the last eighteen months or so. You can see an example of Liverpool’s improved efficiency in the chalkboard of Suárez latest goal against Norwich: 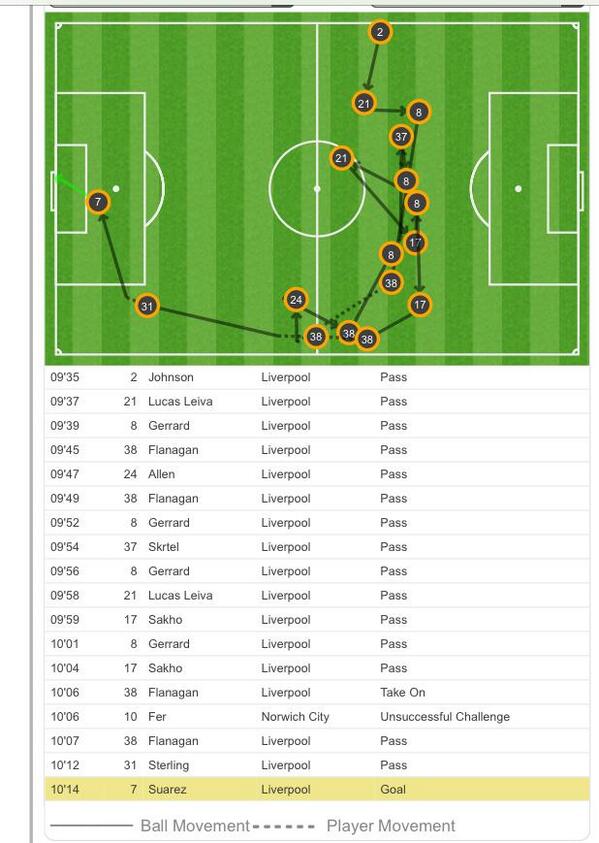 Nine of Liverpool’s ten outfielders contributed to a goalscoring build up which covered the full width and two-thirds of the length of the pitch, and lasted for thirty-nine seconds. The key thing though is that it took just fifteen passes for this move to unfold in full. Liverpool have become a deadly and effective attacking unit in the last few months, and this has enabled them to charge up the league table with goal after goal after goal.

To finish, my latest attempt to try to visualise the Brendan Rodgers era using my very limited skills. This should be self-explanatory thanks to the colour coding, but if nothing else then just enjoy the strip of green at the bottom of this chart. A minimum of two greens and an orange to complete the chart, and Kopites the world over will be very happy indeed. It’s been a long road between trips to Carrow Road for Brendan Rodgers, but an enjoyable and worthwhile one too. The ultimate twenty-four year journey might just be about to come to an end too…