The 2013/14 season ended with Liverpool having scored more goals than they ever have in a Premier League campaign, but also conceding more than ever before (on a goals-per-game basis) too.

I thought it might be of interest to see at which point this years vintage passed their (occasionally) illustrious predecessors. 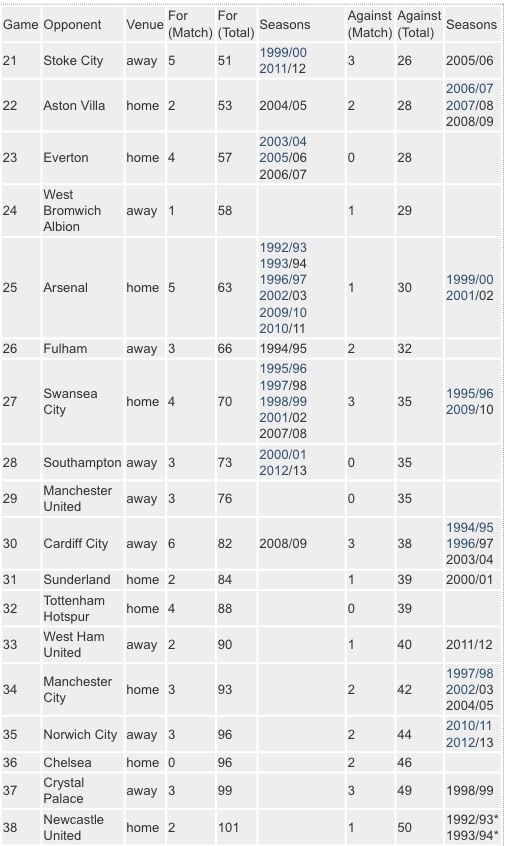 *42 game seasons, so this is where they were matched on a goals per game basis.

The scoring tallies of fourteen of the last twenty-one seasons were matched between games 24 and 28, with a new record set with eight games to spare.

At the back, it was only in the final nine games that the majority of the previous defensive records ticked past, via own goals, defensive errors, punched goalkeepers and the general wide open play encouraged by Brendan Rodgers.

The merits of the Comolli/Dalglish regime have been repeatedly debated in the past, but the fact that Liverpool have scored more in their last sixteen games than they did in the whole of 2011/12 is a damning indictment of their work.

The above table also shows how defensively strong Liverpool were in Benitez’ best Premier League campaigns. The current Reds team had conceded as many as Rafa’s best four seasons after just twenty-two games this time around.

It has been a remarkable season, and if you ever wanted a single stat to sum it up, the fact that the Reds have set club records for both scoring and conceding must surely be it. I can’t wait to be just as entertained in 2014/15.