As various news outlets are reporting that Liverpool have agreed a £3m deal to sign Mexican goalkeeper Guillermo Ochoa in January, I thought I’d take a look at his numbers to see how he fares compared to keepers in the Premier League.

A couple of things unfortunately hamper the research somewhat:

a) He hasn’t played any league games since signing for Malaga on a free transfer in the summer (which obviously raises the question: Why didn’t Liverpool get him for free six months ago if they wanted him?)

b) The team he played for last season (Ajaccio in France’s Ligue 1) were bad. Really, really bad. They finished bottom of the division, winning only four times in the whole season. It’s therefore hard to assess Ochoa fairly, as he will have been exceptionally busy and offered little protection from his defence. On second thoughts, maybe that makes him perfect for Liverpool….

Due to the poor nature of his team, it seems pointless to compare Ochoa’s figures to the top goalkeepers in England, so here’s how his save percentages compare to the average in the Premier League:

Although the figures don’t appear to be anything special, bear in mind that Ajaccio allowed more shots on target per game (5.9) than any team in England’s top flight has this season (QPR currently face 5.7), nevermind the Premier League average (4.1) that he is compared to. We can see that the main area he compares poorly on is the centre of the box, but again he had to face 2.95 shots per game here when Liverpool, for example, only allow 1.60 this season.

It’s a similar story with the big chances (which are “situations where a player should reasonably be expected to score usually in a one-on-one scenario or from very close range“), as Ochoa saved 34% of the on-target ones he faced, whereas the average in the Premier League is 40%. But once again, his team allowed 2.35 of these per game when the worst team in England has only faced 1.87. You’re probably starting to get a feel for what he was up against last season.

Despite how much work he had to do, Ochoa wasn’t overly error prone; he made three that lead to a shot last season whilst Simon Mignolet was busy making seven for Liverpool. He also made a slightly higher proportion of his clearances outside the six yard box in 2013/14 than the Belgian did for the Reds (53% vs 48%) which suggests to me that perhaps he won’t be quite as stuck to his line as Mignolet usually is, though there isn’t much in it.

If Simon Mignolet’s distribution has you tearing your hair out, then I wouldn’t put money on Ochoa putting your mind at rest. Over the last three years the Mexican has a pass accuracy of just 51% (compared to Mignolet’s 67% for Liverpool in the league and Champions League) though a lot of this will be down to the fact that he has played 72% of his passes long; for context, that figure is 54% for the Reds’ Belgian stopper. This isn’t to say that the Mexican of Malaga can’t pass well of course, as he may not have been asked to at Ajaccio, but equally I’d be surprised if he made an immediate improvement to the passing from the back for Liverpool.

There may not have been anything that really stands out from Ochoa’s numbers, but if he joins Liverpool then lets hope he can repeat the form he showed against the might of Paris Saint-Germain last season… 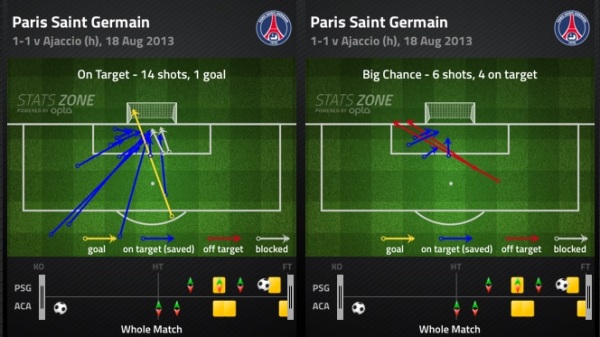 You can also see how busy he was at times, eh?!

Please check out my articles on Liverpool’s other transfer targets, and follow me on Twitter or Facebook. Scroll down to see the related posts for this article. Thanks.

2 thoughts on “Guillermo Ochoa: A Look At His Stats”