Although no deal has as yet been confirmed, Liverpool are clearly looking to bring in Danny Ings from Burnley in the summer when his contract expires. As usual, I thought I’d take a look at his stats, and having done so I can definitely see why he would appeal to Brendan Rodgers.

One of Ings’ main strengths appears to be that he is very good at dribbling past opponents in dangerous areas. I don’t have too much data to compare with unfortunately, but he has gone past a defender in the box every 169 minutes in the league this season, when Daniel Sturridge did that every 205 minutes in 2013/14.

Ings also wins the ball high up the pitch on a regular basis too, which is a big part of Brendan Rodgers’ philosophy. The Burnley striker has recovered the ball every 106 minutes in the final third this season.

Adam Lallana made more final third regains than any other player in the Premier League in 2013/14, and he did so every 99 minutes, and Eden Hazard is the currently leader this season, at one final third recovery every 88 minutes, so Ings is not too far behind the top performers when it comes to winning the ball high up the pitch.

We can see that Ings has shown himself to be a tireless worker in the opposition’s defensive third, with excellent dribbling ability. So far, so perfectly suited to a Brendan Rodgers team.

As the table below shows, Ings’ shot accuracy is a little disappointing, with far too many efforts being blocked or going off target, but equally he’s still converting both all shots and shots on target at a higher rate than any Liverpool player to have had at least 27 attempts this season. The figures here have penalties excluded: 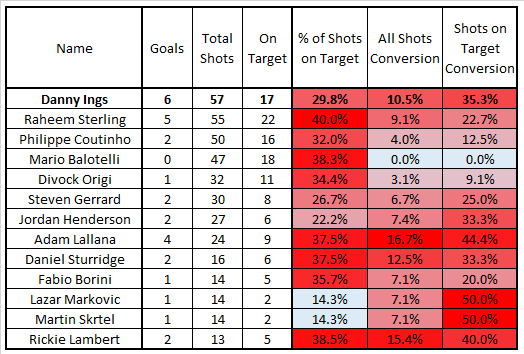 Hopefully with a little more maturity and composure he can test goalkeepers more often than he has been so far this season. He’s only had eight non-penalty big chances (which are “situations where a player should reasonably be expected to score usually in a one-on-one scenario or from very close range“) this season, scoring four, so he’s done well enough here (with the usual small sample caveat), and he would surely have more top quality opportunities at Liverpool than at Burnley too.

In terms of creativity Ings looks pretty good, and that’s whilst playing for a struggling team too. The table below shows attacking midfielders and forwards who have played at least twenty league games this season, and they are sorted by key passes per ninety minutes played. 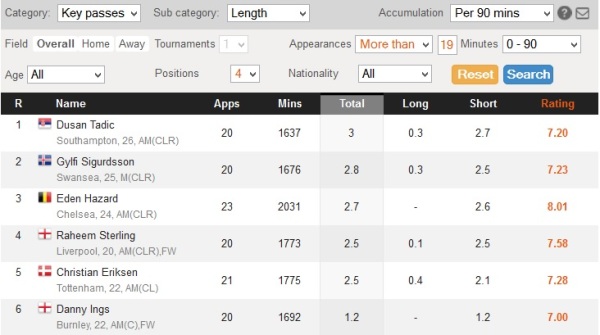 Ings is the sixth best in the league, and whilst there is a large drop off from fifth to sixth, consider the players he is ahead of; Pelle, Van Persie, and Lukaku to name three.

By using my expected assists system (which is explored in more detail here), Ings’ figures look pretty decent too. He has 1.89 expected assists in the league this season, which certainly looks good compared to the figures posted by Borini (0.86), Lambert (0.74), and Balotelli (0.71), and those Liverpool players’ numbers have European games included too.

Danny Ings may not be a world beater yet, and it would be foolish to read too much into half a season of top flight data, but in my opinion there is certainly plenty of potential for Brendan Rodgers to work with here.

Please check out my articles on Liverpool’s other transfer targets, and follow me on Twitter or Facebook. Scroll down to see the related posts for this article. Thanks.

One thought on “Danny Ings: Why Liverpool Are Interested”