I’ve read and heard different opinions on this issue recently; for instance, Michael Cox wrote for Four Four Two (here) that Klopp’s influence is demonstrated by the fact that Liverpool completed more ball recoveries, interceptions and tackles in the opposition half in certain games under Klopp than they did in Brendan Rodgers’ last match.

Sean Rogers, speaking on The Anfield Wrap’s excellent Tuesday Review show (here, subscribers only) was quick to point out how Manchester City won the ball higher up the pitch than Liverpool did last weekend though, which most people would not have expected.

So has there been much of a shift this season since Jürgen Klopp took over from Brendan Rodgers?

As is so often the case, there’s no perfect way to measure this, but using Michael Cox’s article as a starting point, I’ve devised one way to look at this issue. I am going to look at how many ball recoveries, tackles and interceptions Liverpool have made in the final third in the league this season. The samples are small, but the figures can give us an indication at least.

(My definition of final third has to be a little hazy; I collated this data manually via the excellent Stats Zone app, which means I am using the lines on the pitch to determine where the final third starts. It won’t tie up with the official Opta figures for the final third as a result, but I have at least been consistent when looking at the games of both managers).

Here are the figures.

We can see that final third ball recoveries and interceptions have dropped by around one per game since Klopp took over, though tackles have risen by almost one. In total, there have been 1.5 fewer ‘actions’ in the opposition defensive third since the change of manager.

Interesting too that the Everton game featured the fewest final third defensive actions of the season at the time, but a comparison with the Aston Villa match, which still has the most, may have given Cox’s article an entirely different slant.

A thought occurred to me though; Liverpool have had a higher possession average under Klopp (55%) than they did under Rodgers (52.8%) so will have had less opportunity to regain the ball in their final third as a result. Can this be factored in to the above figures?

As possession covers the whole pitch, I have looked at opposition attempted passes in their defensive third. This won’t be perfect as it won’t include passes that begin in the defensive third but end outside it (and going long is a way to bypass a pressing team), but again it should give us an indication. 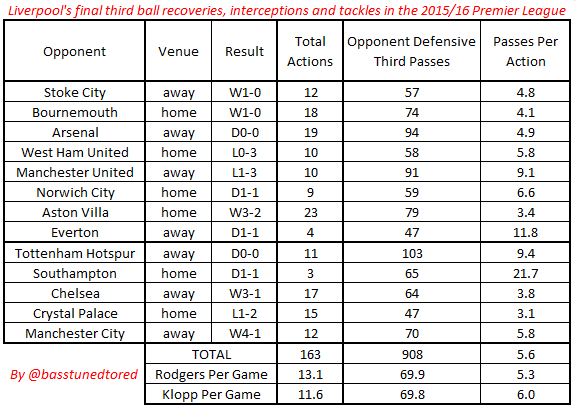 It’s remarkable that the two managers have near-identical levels of opposition defensive third passing on average, but if we use this measurement then once again there has been a decrease in the frequency of final third actions under Klopp so far.

I suspect that if you took the average position of all possession wins then it would be higher up the pitch for Klopp than Rodgers, thanks to the German employing a higher defensive line. It’s also obviously more important how many of these final third possession wins result in chances and goals than the total number of them, but it seems that the Reds have not been winning the ball in the opposition defensive third as often since Jürgen Klopp took over. It’s still very early days for the gegenpressing king at Anfield though, so I’ll be revisiting this at the end of the season.