I didn’t see this match, so this will be brief. Liverpool had a top-level performance at one end of the pitch, and a bad one at the other. Let’s cover the good first, and my observation on this was prompted by this tweet:

The 'perfect' clean sheet by LFC yesterday: No goals conceded, no big chances, no shots on target and no defensive errors. It's been a while

Having looked at the data for this for the period since August 2012, it’s clear how rare this is; Liverpool have done this just once a season in the last three years. Here’s a table of the matches in question, and I’ve ranked them by an additional stat, opposition shots in the box:

Notice how if I had ranked them by total opposition shots, then this match would be the best of the ‘perfect’ clean sheets.

So far, so good. But there really wasn’t much goal threat at the other end of the pitch…. 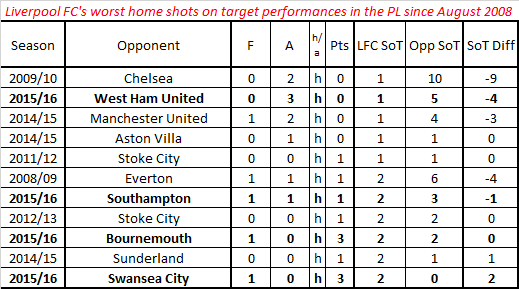 This match was in the worst eleven home league games for shots on target in the last seven years (so 140 matches). What’s worse, as the bold illustrates, four of the bottom eleven attacking games have been this season. No wonder Liverpool are struggling for wins at Anfield in 2015/16.

Jürgen Klopp spoke of sorting out the defence first when he came to Liverpool, and it definitely seems he’s made progress on that front, but the slightly stodgy home attack appears to require fairly urgent attention too.