It’s always essential to remember that all shots are not equal; hence the proliferation of expected goal models across the blogosphere. But I’m sure Brendan Rodgers would have a wry smile at the stats from this match; I wrote here how the Reds had forty-seven shots (including seven on target from inside the box) in an earlier round of the competition against Carlisle, yet only scored once, but Liverpool had seven shots on target against Southampton and managed to score six.

The Reds were undoubtedly aided here by the quality of their passing and the chances that resulted from it. Liverpool had three Opta defined clear-cut chances in this match, which means that they’ve had eight in total in their last two away matches. They were at tough places too, at Man City (analysis here) and Southampton, and every single one of them came from the Reds’ own passes creating the opportunities, and not from opposition errors, penalties or rebounds.

To have six assisted goals in one match is remarkable too; again, the power of the quality of passing was on display in spades. High scoring results can often feature own-goals or penalties, but the Reds didn’t need either in this match. For context, Liverpool had five assisted goals when scoring six at Newcastle and Cardiff under Brendan Rodgers, but obviously there aren’t too many games to compare to when you’re looking for goal fests of this nature!

I’ve often thought that players need to spend plenty of pitch time together in order to develop relationships that can generate high quality chances, but this match certainly made a mockery of that theory. I don’t usually do this for a one off game, but here are the chance creation combinations for this match, with those highlighted featuring an assist. 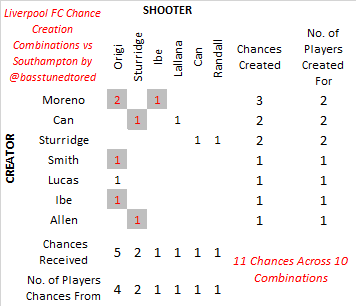 I doubt we’ll see the likes of Sturridge to Randall or Smith to Origi too often, but it was great to see a new team link up so well. The combinations in this match certainly made quite a difference to the assist combinations chart, which I’m publishing here for the first time this season.

Firmino to Coutinho is the only combo with more than one, and as it contributed goals at Chelsea and Man City, I certainly hope we see more of it over the rest of this season. To finish, a look at the rate with which Liverpool’s players are scoring or providing assists in 2015/16.

I suspect that Brad Smith will still top this chart at the end of the season with that kind of record! More seriously though, there are a lot of players showing fantastic form, not least Daniel Sturridge who has continued his Liverpool career record of scoring or assisting a goal every ninety minutes that he is on the pitch. Just need that to be a bit more often than it has been in the last eighteen months…

With last season’s top assist provider Jordan Henderson returning to fitness, the club’s four strikers all contributing to goals at a better rate than one-in-two (albeit Ings is out long term) and Jordon Ibe scoring two and winning a penalty in his last seven appearances, there are lots of reasons for Reds to be cheerful at the moment.

I was lucky enough to be at this match, and it’s certainly one of the more memorable games I’ve attended. As it was Liverpool’s largest League Cup win against a top flight team, I think we’ll all remember this match for years to come.