As Liverpool passed themselves into endless cul-de-sacs whilst on their way to a 2-0 defeat at Burnley, one of their many issues became painfully apparent (and not for the first time): Daniel Sturridge was not in or even near the box enough.

The Reds (or should that be the toxic greens) completed twenty-two passes in the Burnley box, which on the face of it is a decent total; Liverpool only bettered that once on the road last season, with twenty-five at Crystal Palace, and Saturday’s tally was only bettered twelve times by away teams in the 380 Premier League matches last season.

The problem was that Daniel Sturridge, the only proven and consistent Premier League goal scorer in the Liverpool squad, was only the recipient for three of them. A dig into the numbers shows that this is part of a very concerning trend, and they back up what Kopites have seen themselves whilst watching the matches in 2016. 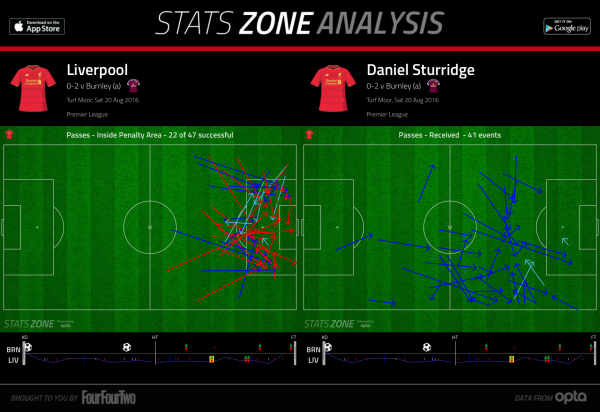 In the rest of this article, I am going to be referring to the stat ‘touches’. Just to be clear, this does not mean literally every time a player touches the ball, and in truth it should probably be called something like ‘actions’; it is the number of match events a player logs, so all of their passes, shots, tackles, dribbles and so on. The data from Daniel Sturridge’s Premier League career with Liverpool illustrates how he is having fewer touches in the penalty area than he used to.

The following table (which is annoyingly missing data for one match I couldn’t get) demonstrates how the location of Daniel Sturridge’s touches has changed over time.

Leaving aside the one game Sturridge has played this season, we can see that his total touches per ninety minutes played has remained almost constant in each of his first four seasons, fluctuating somewhere between 48.8 and 51.3). The final third touches are grouped fairly close together too, at around the 29 mark.

We can see that Sturridge’s penalty box touches per ninety has declined almost year on year though, and indeed due to the differing amount of total touches, the percentage of his touches in the penalty area has got lower for each of the last three full seasons. In short, Daniel Sturridge is as involved in matches as much as he ever was overall, but less often in the opposition penalty area where he does his best work; just five of Sturridge’s forty-three league goals for Liverpool have been scored from outside the box.

On one hand, as his shots in the box per ninety minutes figure has remained reasonably constant over the past three seasons (ranging from 2.6 to 3) perhaps it doesn’t matter that his other penalty box touches have declined, but then do you want your best striker, who happens to be injury-prone, to cover more ground in total and be less involved in the box? I’d suggest not.

It would be folly of me to suggest a direct and concrete correlation between these final stats, but consider the following. Daniel Sturridge has had 1.2 fewer penalty box touches per ninety minutes under Jürgen Klopp than he did under Brendan Rodgers, meaning that his previous average of 7.1 has dropped by 15.8%. The decrease in his minutes per goal rate between the two managers? 15.6%.

He’s still scoring in the league every 134 minutes for Klopp, which is hardly a catastrophic return, and the sample sizes of the managers are wildly different (plus of course the German can’t call upon Suárez or Gerrard to make things happen for Sturridge), but the figures here suggest that Jürgen Klopp needs to find a way to get Sturridge into the box more often, so he can sit back and count as the goals rain in.