Liverpool drew 1-1 with Chelsea at Anfield on Saturday in what feels like a missed opportunity while not being a terrible result.

At Stamford Bridge last season, Jürgen Klopp’s side played the second half against the 10-man Blues superbly but they were unable to turn an indentical situation into a win here. If you ever need to sum up the difference between the Chelsea teams of Frank Lampard and Thomas Tuchel, these two matches wouldn’t be your worst Exhibit A.

This is a game where the expected goal figures need to be ignored to some extent, such was the chaos which led to Reece James’ red card. Data providers and xG models don’t even agree on how many shots Liverpool had in the manic passage of play which led to the Blues’ right-wingback handling on the line.

Michael Caley only counts the highest value chance in an attack, which seems sensible and gives the Reds an xG of 1.3 plus the penalty. The 2.7 from FiveThirtyEight and 3.35 from Infogol feel unrealistically high based upon the attacks which Liverpool mustered. 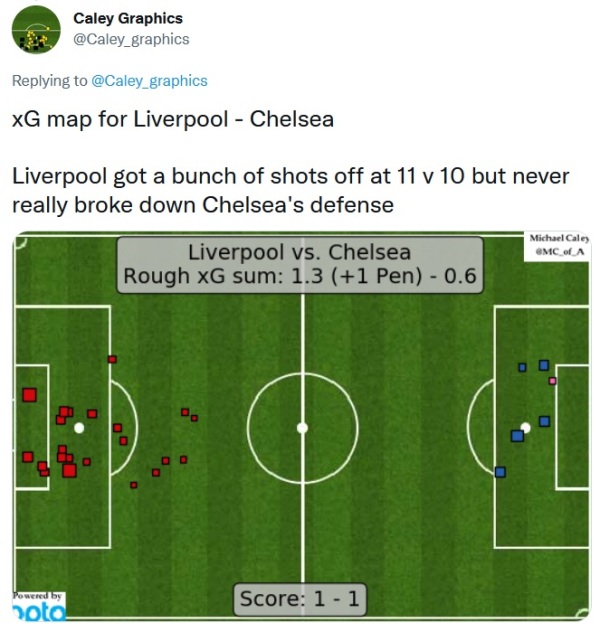 And what is far more pertinent is the quality of the chances which were put on target, and how testing they were for Edouard Mendy. As we shall see, he wasn’t unduly troubled.

The level of desperation in the third match of a season will never equal what is experienced in the third-last, but the second half of this game had shades of the infamous Anfield clash between the teams in 2013/14.

Satisfied to protect the score line they had at half time, in both cases Chelsea were happy to hunker down and make life very difficult for the Reds. Liverpool had plenty of shots with several attempts on target, but the key fact was that they were mostly low probability opportunities from a long way out. In neither example did they have a clear-cut chance. 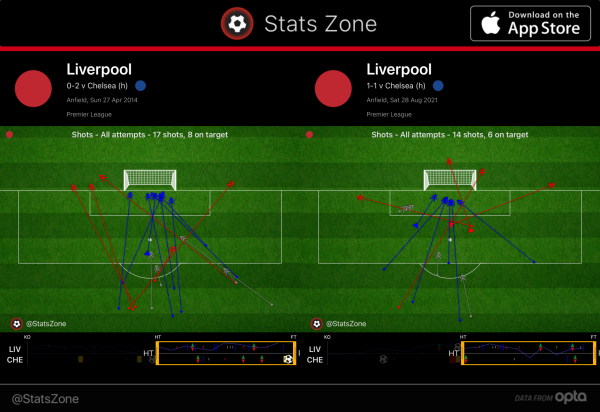 Liverpool may have had up to 3.35 expected goals, but their post-shot xG (which takes account of the likelihood of on target efforts beating the goalkeeper) was only worth 1.1 in the opinion of Statsbomb. While they don’t provide the figures for individual shots, as an on-target penalty finds the net 85% of the time it’s safe to say the other efforts which were heading within the goalframe did not seriously challenge Mendy’s shotstopping capabilities.

Salah has to be one of the best penalty takers in the Premier League. Mixes it up all the time. pic.twitter.com/zzTYP63oY8

In our review of the Burnley match, the link-up play between Harvey Elliott and Trent Alexander-Arnold was mentioned, and Klopp referred to their triangle with Mohamed Salah when speaking after the match.

“The triangle on the right-hand side worked pretty well. That’s important for us, the understanding between Mo, Trent and Harvey is really good. Three footballers on this side works really well.”

There was a good example of this early in the second half, which created one of Liverpool’s better chances of that 45-minute period. The three players in question linked up, with Salah providing a cross into the box for Diogo Jota. The Portuguese forward headed over the bar, but the build up had seen the Reds move the ball well in front of the Blues’ backline.

And the trio certainly linked up a lot throughout the match. Alexander-Arnold passed to Elliott 18 times, the youngster passed to Salah the same (only Joël Matip to Virgil van Dijk topped that total, with 20 passes). Coincidentally, there were 14 passes from both Harvey to Trent and from the right-back to the Reds’ number 11 too. Here are the pass maps for the triangle.

But did they, and the Liverpool team as a whole, work Chelsea hard enough in the second half? Well, yes and no. If we look at the Blues’ defensive efforts in context, it becomes clear they were very busy.

In the 2020/21 Premier League, Leeds United made the most tackles with an average of 19.5 per game, while three teams (Fulham, Leicester and West Ham) topped the interceptions chart with 11.5 per match. Ten-man Chelsea made 16 and 15 respectively in their 45 minutes spent defending the goal at the Kop end of Anfield. It’s likely plenty of those actions were performed against ‘the triangle’ as the location maps show. 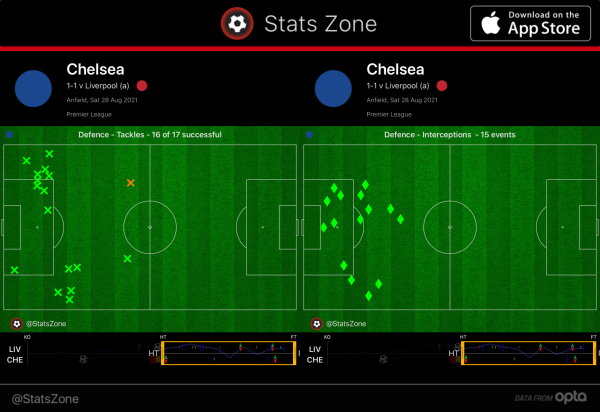 Chelsea had lots of defending to do, but watching the match it didn’t feel like it was particularly ‘last gasp’ to use a well worn football phrase. From the 53rd minute to full time Liverpool only attempted six take-ons and none of them were successful. Despite their man advantage they didn’t overload a defender to get in behind the visitors very often either; there was just one attempted cut back pass from each side of the penalty area in the second half.

The Reds knocked the ball around and recycled possession reasonably well, but the fact they only completed three more passes into the penalty area than the Blues did after the interval isn’t great when they had 67 percent possession.

It probably would’ve suited Liverpool if they had simply scored before half time and James had not been sent off, to keep the game more open. Chelsea have the best defensive record in the Premier League in the Tuchel era and they showed why, leaving Klopp to ponder if he and his men could’ve done more to force a win.