I wasn’t planning to do one of these for this match, but as there were some impressive stats from a very good Liverpool display I thought I would. The Reds played well in any context, but not least when considering the injuries they suffered both before and during the match.

There was a great line regarding this from Klopp at the end of his post-match interview on SKY. When asked about the games coming up with the horrendous injury list, he said “If we have eleven, we will fight”. They certainly fought well at Stoke, and here are a few key stats from the match.

END_OF_DOCUMENT_TOKEN_TO_BE_REPLACED

As I was lucky enough to attend the second leg of the League Cup semi-final between Liverpool and Chelsea, I thought I’d post a few thoughts on the match, the tie overall, and of course throw in a few stats.

END_OF_DOCUMENT_TOKEN_TO_BE_REPLACED 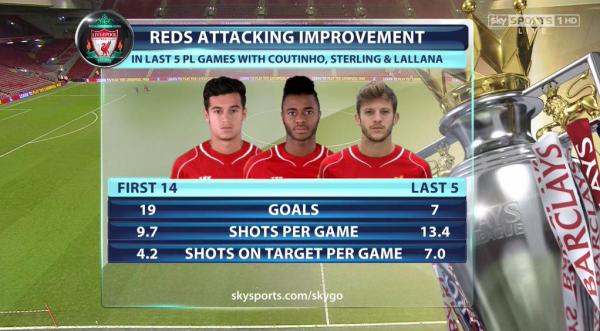 The match was Liverpool’s twenty-second of the season, yet it was only the sixth time that this trio had appeared on the pitch at the same time. Now that they’ve played together in the Reds’ last five games, with impressive results, I thought I’d take a quick look at the impact they have had and how well they have linked up.

END_OF_DOCUMENT_TOKEN_TO_BE_REPLACED

It’s rare for a club to purchase two players from the same team during one transfer window, yet that is exactly what Liverpool have done by taking Adam Lallana and Rickie Lambert from Southampton (and I have previously written about the players at length here and here).

This is good from an amateur analyst’s point of view, as it has enabled me to see how they linked up last season. I looked at the Suárez and Sturridge partnership here, so I thought I’d compare the Liverpool new boys with the Anfield heroes of 2013/14.

END_OF_DOCUMENT_TOKEN_TO_BE_REPLACED

As the deal for Lallana appears to be close to completion, I thought I’d better move this recent piece back to the homepage.

With Liverpool hotly tipped to sign Southampton’s England international Adam Lallana, I thought I’d review his creativity stats via my chance quality system, to see if his raw numbers warrant the £20m+ transfer fee that he is likely to command. I’ve also tried to pick the bones out of a couple of other important statistics too…