Liverpool’s win against Tottenham Hotspur last weekend was obviously well received by Reds everywhere, but at the same time it didn’t teach them anything new about the strengths and weaknesses of their team. Jürgen Klopp’s men have been ruthless this season against teams who play a high line, as Spurs did to suicidal effect at Anfield, but they have seemed toothless against the low block favoured by the Premier League’s lesser lights.

The Tomkins Times published a very good article this week (here) which looked at how Liverpool have fared against teams who have ‘parked the bus’ against them this season. The findings were certainly interesting, but in my continual quest for context with statistical analysis, I thought it would be worthwhile comparing the Reds to the other members of the big six to see how each team has fared. My assumption is that all teams struggle against a low block, but is that actually the case?

END_OF_DOCUMENT_TOKEN_TO_BE_REPLACED

Where to start with a result and performance like that? Fortunately there’s so many good stats to get our teeth into, that this should virtually write itself.

END_OF_DOCUMENT_TOKEN_TO_BE_REPLACED

The answer to the title of this article will probably make or break Liverpool’s season, and therefore determine if Brendan Rodgers can continue to remain in charge at Anfield. I’ve taken a look at the clear-cut chance stats to see what they suggest.

END_OF_DOCUMENT_TOKEN_TO_BE_REPLACED

I recently appeared on an Anfield Index Analytics podcast (which you can listen to here) in which host Dan Kennett and I ran through the pros and cons of the five contenders who are aiming for a third or fourth placed finish in the Premier League this season. As there is only one third of 2014/15 now remaining, I thought I’d share the stats and my thoughts here.

END_OF_DOCUMENT_TOKEN_TO_BE_REPLACED

As various news outlets are reporting that Liverpool have agreed a £3m deal to sign Mexican goalkeeper Guillermo Ochoa in January, I thought I’d take a look at his numbers to see how he fares compared to keepers in the Premier League.

END_OF_DOCUMENT_TOKEN_TO_BE_REPLACED 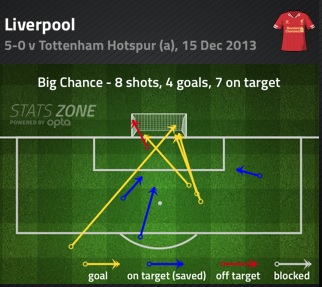 When I was recently updating my creativity combination info (which you can see here), it really hit home to me just how poor Liverpool have been in creative terms this season, and particularly so recently.

It’s hard to know what to say on here though without endlessly repeating myself. The three issues I thought might cause the Reds problems this season, which I wrote about at length here (fewer set piece goals and big chances than last season, and Balotelli being a poor finisher), have basically bogged Liverpool down from day one.

The big chance issue is frankly terrifying right now though, as it illustrates just how poorly Liverpool are doing in attacking terms at the moment.

END_OF_DOCUMENT_TOKEN_TO_BE_REPLACED

Liverpool have not made a flying start in 2014/15, yet I don’t believe that things have been quite as bad as they have been portrayed.

One of the key things that I monitor is expected assists, which as you may know by now is based upon where on the pitch chances are created, and the likelihood that those opportunities will be scored. Using this metric, the Reds appear to be in fine fettle.

END_OF_DOCUMENT_TOKEN_TO_BE_REPLACED

In the first episode of the Anfield Index Analytics podcast (which I took part in, and you can listen to here), I mentioned that Liverpool have recently had a phenomenal record when starting matches with a diamond in midfield: seven wins and one draw from eight matches.

I was even more intrigued in the formation’s possibilities when I saw this tweet on Monday:

On the same day as the above tweet, England triumphed 2-0 in Switzerland by employing a diamond formation too, so it definitely seems to be the strategy du jour right now.

END_OF_DOCUMENT_TOKEN_TO_BE_REPLACED

Every match Liverpool play at the moment is the biggest league encounter in over twenty years, and this is no exception. A home win would ensure that Chelsea can not win the league this season, and Liverpool would be just four points away from the ultimate glory.

Having looked at shots on target ahead of the Manchester City game, I thought I’d return to my chance quality work to preview this one.
END_OF_DOCUMENT_TOKEN_TO_BE_REPLACED

The title of this article is not my attempt to reposition Liverpool as part of a three-team elite alongside the financially doped blue titans of Manchester City and Chelsea; rather, I have decided to follow up my recent piece on Liverpool’s record with big chances with a look at the tallies for their title rivals.

As they both still have to visit Anfield this season, I was very interested to check out their form with regards to top quality goalscoring opportunities.

END_OF_DOCUMENT_TOKEN_TO_BE_REPLACED

There has recently been a fantastic addition to the already great Stats Zone app: big chance data. Also sometimes referred to as clear-cut chances, big chances are defined by Opta as:

A situation where a player should reasonably be expected to score usually in a one-on-one scenario or from very close range.

Whilst the much missed EPLIndex site was a great source of the basic big chance data (so whether they were scored or not), using Stats Zone we can now see where on the pitch the chances occurred, and whether or not they were on target. Needless to say, my first thought upon discovering that this information was available was to see how Liverpool have fared at both ends of the pitch in 2013/14.

END_OF_DOCUMENT_TOKEN_TO_BE_REPLACED

This Thursday sees the inaugural Opta Pro Analytics Forum, an event which will see lots of top football analysts meet up to share their work, and I have been fortunate enough to be invited to attend.

As chance would have it, whilst compiling data for my Chance Quality project earlier today, I noticed a curious anomaly that I had not come across before, and a request for clarification on Twitter lead to an eye-opening debate.

END_OF_DOCUMENT_TOKEN_TO_BE_REPLACED

After a frenetic, see-sawing Merseyside derby (which was Liverpool’s highest scoring league draw since the 4-4 with Arsenal at Anfield in 2009), I guess the most important facts from a Liverpool perspective are that they now have four points more than they had from the corresponding fixtures last season, seventy points from the last thirty-eight league games, and have only had more than twenty-four points from the first twelve games four times in the Premier League era.

Brendan Rodgers has now taken the same amount of league points (eighty-five) as Kenny Dalglish did in his second tenure, but in six fewer games. Overall, the Reds are doing pretty well.

END_OF_DOCUMENT_TOKEN_TO_BE_REPLACED

After my first attempt at analysing a match via Stats Zone two weeks ago, I’ve again taken to the app to cast my critical eye over Liverpool’s 2-2 draw away at Swansea City.

Although I am happy enough with a point, as it maintains the Reds’ five point advantage over their corresponding fixtures from last season, there were many areas of the performance that left a lot to be desired.

END_OF_DOCUMENT_TOKEN_TO_BE_REPLACED

There is an exclusive Premier League players group, of which Liverpool currently possess two of the fourteen members.

I am referring to men who have played at least one hundred key passes in total across the last two seasons.

The good news for Brendan Rodgers is that in terms of the frequency with which they fashion opportunities, the Reds currently employ two of the top nine. The potentially bad news is that they both look set to leave Liverpool before the end of the summer. END_OF_DOCUMENT_TOKEN_TO_BE_REPLACED

This article first appeared on The Tomkins Times on 25th June 2013.

As I sit writing this and you sit reading it, even though those two events are happening at different times, it’s a guarantee that wherever he is right now Luis Suárez will be telling anyone who cares to listen that he loves Liverpool, hates the media, and greatly admires the work of Real Madrid and Barcelona.

In fairness to him, so do I, but then the future of Liverpool FC is not dependent upon whether or not I stick with them; with Suárez, it matters a great deal.

Or does it? I’m sure by now you’ve seen the statistics for when Liverpool have had Suárez in the team in the Premier League compared to when they haven’t, but for the record:

There we are then; Liverpool are better off without Suárez, to the tune of over half a point per game. Case closed.

In reality though, thirteen games is far too small a sample to make a conclusive judgment on whether or not Liverpool will be a better team if Suárez leaves, so I have decided to dig a little deeper, and look at the key match stats that Luis affects.