Having originally devised this idea in 2013, this is the third season where I have collated data on which Liverpool players linked up to create chances in the Premier League. You can see the information for 2013/14 here, and 2014/15 here.

In previous years I have looked at other aspects beyond the raw figures, and whilst I plan to do similar with this season’s numbers, time is as usual against me so this will have to suffice for now. Without further ado… 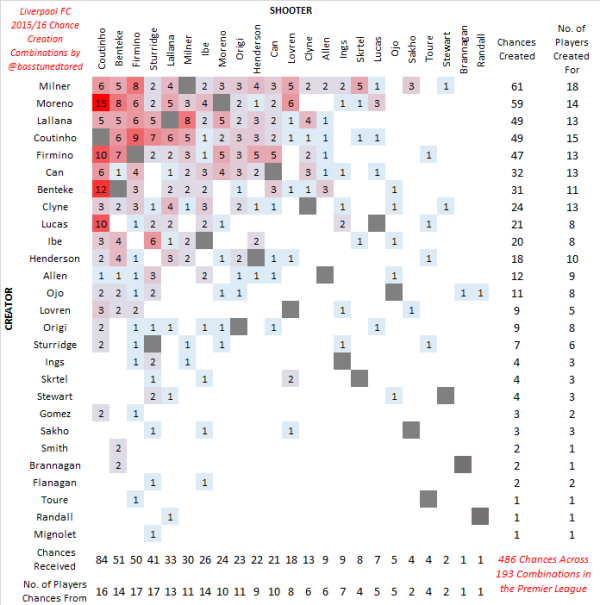 As always, here’s a selection of things I’ve noticed from this data (though please feel free to add more in the comments section if anything catches your eye). With a lot of these, it’s important to remember how many different players Liverpool used this season, as this affects how many combinations it’s possible to have. The Reds had thirty different starters in 2015/16, the most in the division.

I’ve also compiled the assist data, and this is for all competitions.

There were sixty-two different combinations here, though only eight of those linked up for more than one assist. Both Coutinho and Firmino were involved at either end of seventeen assisted goals, though as Firmino essentially ‘assisted’ the two own goals too, I’m giving him nineteen in total!

As I say, I hope to do more with the data I’ve collected if I have time. Watch this space…