Now that the dust has settled, I thought it might be interesting to review some of the statistics from Liverpool’s Europa League campaign (excluding qualifiers), to see what can be learned, and hopefully to whip up some interesting debate. You might be surprised to hear in some regards they did well too.

The statistics certainly don’t make for pretty reading though. No away wins, five 0-0’s, and only scoring in four out of the ten games in total. The most sobering fact of all is that a fan travelling from Liverpool to the five away games will have clocked up approximately 12,200 miles in round trips at great expense, and their only reward in terms of goals to cheer was a Milan Jovanovic header in Bucharest. Clearly not good enough.

It’s quite interesting that the match facts closely mirror the league form in some ways:

Note – League stats up to and including Man United (home), as it was the last league game prior to Europa League exit.

A different breakdown of results perhaps, but almost identical points and average amount of possession per game.

Whisper it quietly, but Roy Hodgson actually did quite a good job in the group stage of the competition. How so, with so many poor results and performances you might ask? Liverpool qualified in first position in their group with a game to spare, without having to overly utilise their best players, and no major injuries were sustained. Of course, as fans we’d like to be entertained, but you can’t argue that he got the job done with a minimum fuss.

To illustrate this point, these figures show the percentage of matches that a player has featured in for Liverpool in both the Europa League and in the Premier League this season:

Whilst I have generally only included the players who have been at the club for the whole season in order to be eligible for all of the Europa and Premier League games (so no Torres, Babel, Konchesky or Carroll), I have included Nathan Eccleston.

Why? Because here is a player who is currently not a regular starter for Charlton Athletic, a team who at the time of writing lie 12th in League One, yet has featured in 40% of this seasons European matches for Liverpool FC (the five time champions of Europe, as if you need reminding). As he has been on loan since January, he actually featured in 66% of the games he was at the club for.

This is not an attack on Eccleston, who hopefully will develop into a fine player, but it certainly illustrates the quality of the Europa League rather well. As you can see from the table, the club’s usual bit-part players feature highly with the better players generally much lower down.

Steven Gerrard (at the very bottom of the above table) is a case in point. He only featured in one half of one game, and yet became the club’s top scorer in the competition with a third of the team’s total of goals, thanks to a hat-trick against Napoli. Fernando Torres (remember him?) only played in one game too.

By the time the Reds reached the knock-out stage however, Torres and Babel had left and their replacements were cup-tied or injured. Although the opposition were not necessarily any better than Liverpool’s group stage opponents, there’s always far more chance of an upset over two legs than in a group stage.

Personally, I think the tactics were probably at fault against Braga rather than which players were utilised, but a better analysis of that can be found here. After all, the Reds had a massive 67% of the possession at home, and an even 50-50 split away, and yet barely created a chance worthy of the name in either leg.

What’s worse is that Liverpool players were caught offside an incredible nineteen times across the two legs, compared to Braga’s twice, and none at Anfield. The Reds were flagged offside more in total than any other team in the competition; a by-product of too many long balls/hoofs?

It’s also important how players integrate into the team as a whole. The table below shows that wholesale changes were usually made from the previous league match, especially in the group stage: 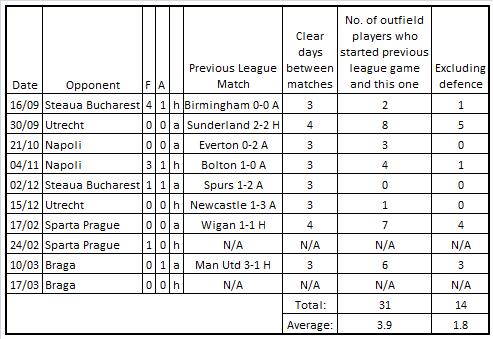 It’s interesting that the most players were retained from the previous league game where an extra day’s rest had occurred and this is surely not a coincidence.

But this approach meant that squad players were added on mass to the team, which is rarely a recipe for a cohesive performance, regardless of the qualities of those players.

It seems that Liverpool generally treated the competition with the disdain that many fans think it deserved, and paid the price accordingly.

But surely one trophy is better than no trophy at all, wherever it may sit in the pecking order of prizes? After all, if the Reds miss out on Europe altogether next season, then hypothetically I’d be happier with winning the Europa League and finishing 17th than only finishing 6th as looks likely that Liverpool will.

Where’s the glory in that?