This piece first appeared on The Tomkins Times on 13 March 2013. Statistics were sourced from WhoScored and EPLIndex, relate to league games only, and are correct up to 1st March 2013.

It recently occurred to me that Liverpool have dropped a lot of points this season by conceding goals from set pieces, West Brom’s opener in their win at Anfield being the most recent example. It’s also a well established truth that the Reds are poor at attacking set plays too; there was a ‘Pool fanzine in the 1980′s called ‘Another Wasted Corner’, after all.

I therefore thought I’d check how the Reds have fared at both ends of the pitch in comparison to their Premier League rivals this season, to establish if they actually are particularly weak in this area.

Goals from set pieces account for 25% of the total scored in the English top flight (which inspired Damien Comolli to purchase Charlie Adam, but that’s another story), and so they are often a vital element in deciding the outcome of football matches, with a goal scored via a set play approximately every one-and-a-half games across the division.

The first thing I noticed from a defensive point of view is that Liverpool’s opponents have relied on set pieces for a larger proportion of their shots than has been the case for any other defending team this season.

Nearly one in three (30.4%) of the Reds’ opposition shots have come from set-plays, and to my mind this is a good thing; at least by giving away relatively fewer chances in open play, Liverpool could improve their goals against tally with better defending from set pieces. I’m no tactical expert, but I think with a decent defensive coach a team should be able to improve how it deals with set piece attacks.

This season, the Reds have conceded nine goals from set pieces (26.5% of their total), which is spot on the average for the division, with eight coming away from home. Similarly, conceding from 9.8% of the set piece shots they have allowed puts Liverpool close to the Premier League average of 9.2%.

With regards to corners specifically (where the most up to date info I could source came from Martin Tyler’s Skysports blog on January 30th), the Reds have given away the second fewest corners in total, which is encouraging with regards to their defensive set up generally, but twelve teams have a better record in terms of how many goals their opponents convert from corners.

Only six teams have conceded a greater proportion of their goals against from all set plays than Liverpool have, illustrating that Brendan Rodgers’ men definitely have room for improvement in this area, and could reap the benefits by improving their set play defending.

As an aside, a quick pat on the back for Sunderland; the Mackems have conceded the most shots from set pieces in the league, yet have conceded the fewest goals from them. Purely hypothetical of course, but if the Reds matched Sunderland’s defensive record on set plays this season, they’d have conceded six fewer goals.

That shouldn’t be underestimated, as it could’ve earned the Reds quite a few more points. Matches away at Everton, Arsenal and Chelsea (for instance) might have been won if set piece goals hadn’t been conceded. For once, Liverpool could do with learning something from a Martin O’Neill team, and I don’t often say that.

At the front end of the pitch, it’s no surprise to see every football purist’s nightmare combination of West Ham and Stoke lead the way with regards to proportion of shots that come from set plays.

Whilst Liverpool are not overly reliant upon dead ball situations to create shooting opportunities, it’s probably for the best considering that they have only converted 6.0% of their set piece attempts, which is the fifth worst record in the Premier League this season.

Still, that does equate to eight goals scored by Liverpool, and whilst points have been lost via set piece goals conceded as I mentioned, in fairness the Reds have earned some by scoring them too; both goals in the 2-2 home draw with Manchester City (including the Skrtel header pictured below) were from dead ball situations, for instance. 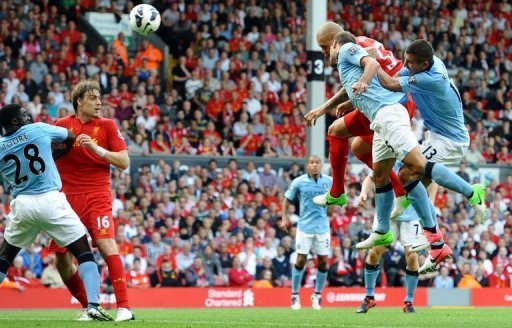 From an attacking perspective, I have been able to source more specific set play stats, and as with most things Liverpool-related this season, it’s a bit of a mixed bag.

The main thing to take heart from is the percentage of corners that the Reds have taken short this season. In his fabulous article ‘Winning By Numbers‘, Lee Mooney identified that teams that win tend to dominate their opponents in terms of short corners (amongst other things), so the fact that Liverpool have taken the third highest proportion of short corners this season (16%) is encouraging for the future.

Rodgers’ tactics have increased this figure on the previous two seasons (which saw 14.6% and 11.3% of corners taken short respectively), though the Reds are still behind the Benitez years (in more ways than one!), which peaked at 21.9% in 2008/09.

It would be wrong to assign a causal relationship between short corners and winning, but to me it makes sense that the better teams would favour this approach. Only one in thirty-four corners results in a goal, and the average crossing accuracy from corners in to the box in the Premier League is just 31.8%, so a team would surely be better concentrating on retaining possession in a dangerous area of the pitch, and a short corner allows this to happen.

Credit here goes to Raheem Sterling, as seven of his eight corners have been played short, whilst none of his teammates average more than one in three. The main concern for me with set plays and corners is the apparent lack of plan Liverpool display. Are they not drilled in what to do in these situations?

For instance, whilst it’s understandable that any player might take a short corner if they’re close to the byline and want to take it quickly (which probably explains Sterling’s frequent use of them), why have twelve different players launched corners into the box for Liverpool so far this season?

Only six different players have done so for Manchester United and Chelsea as an example, so why are the likes of Henderson, Allen, Sturridge and Borini occasionally taking corners for Liverpool?

The problem here is that the part-time corner takers aren’t accurate with them. The Reds’ most frequent corner takers (Gerrard, Downing and Suárez) are the only three who find a team-mate with an above league average percentage of their corners.

At the opposite end of the scale, Sahin, Shelvey and Suso have taken 29 corners between them and found a red shirt just four times. Nuri Sahin is by far and away the most disappointing in this regard; he fired forty accurate corners into the box for Dortmund in 2010/11, yet in his time at Anfield not one of the nine corners he sent in to the penalty area found a colleague. I suppose a combination of rustiness and not being familiar with his new team-mates is to blame, if I’m being charitable.

In spite of all this, the Reds have scored six goals from corners this season, which (as at January 30th) only two teams can better, though as they’ve taken the most corners of any Premier League side during this campaign, Liverpool’s conversion percentage (3.47%) is very slightly below the average for the division as a whole (3.54%).

At first I thought winning a lot of corners was a positive thing, but as Luis Suárez has won more corners than any other player in the Premier League this season, I suspect that wayward shooting can play a part here. Liverpool are having a higher proportion of their shots blocked than in three of the past four seasons, and this must surely contribute to the corner count.

To finish, an attempt to try to assess who are the best and worst teams with regards to set-pieces. I have subtracted the set piece goals against conversion percentage from the goals scored equivalent, meaning that the higher this figure, the better a team is at both ends.

The main stats to take from the above are:

Although set plays are never likely to be a major tactical facet of how Liverpool attack teams under the management of Brendan Rodgers, I think there’s certainly evidence here that improvement with regards to set pieces at both ends of the pitch could potentially see several tight games go their way next season.

When the fight for a fourth place finish is already so difficult, some improvement here could make millions of pounds of difference at Anfield in the future.